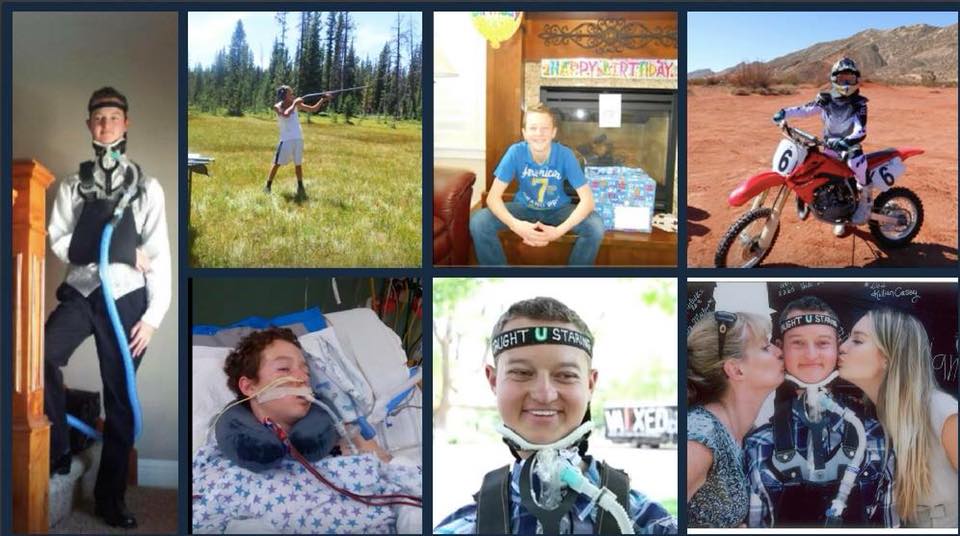 In 2013 Colton Berrett, a 13 year old Utah boy, suffered paralyzing transverse myelitis two weeks after receiving a third dose of Merck’s Gardasil vaccine. Colton became the first male face of Gardasil injury after appearing in an interview in August of 2016 with the creators of the documentary “Vaxxed: From Cover-up to Catastrophe,” which exposed fraudulent reporting by the Centers for Disease Control on the safety of the MMR vaccine.

Colton’s doctor, who administered the Gardasil series, initially claimed it would protect the teen’s future wife from cancer. However, once Colton became permanently paralyzed by severe spinal cord swelling, his doctor immediately ceased providing this vaccine to male patients in his practice.

As with many teens injured by Gardasil, Colton was extraordinarily athletic prior to receiving the vaccine, excelling in baseball, Motocross, skiing and many other sports. Three years of therapy gave him back the use of his core and legs, but left his arms, neck and lungs permanently disabled. On video, Colton appeared optimistic about adjusting to his new life, one which required a neck brace, arm sling, and permanent attachment to a respirator. Colton met with former Utah Congressman Jason Chaffetz in September, 2016, to speak about his injuries.

Colton’s death comes on the heels of a December, 2017, Slate investigative article that exposed faulty side-effect reporting in the Gardasil safety trials. Slate alleges that rather than reporting all new developments, trial investigators were authorized to withhold information regarding Gardasil side effects from regulators. Instead of sharing the information, trial investigators reported it on a form entitled “New Health History,” which was not submitted to licensing authorities.

Colton’s family is now grieving his loss a second time.

At a candlelight vigil for Colton on Friday January 12th, we listened to three additional Utah parents who have lost children to vaccine injury. A missionary flu vaccine put Lori Webb’s son, Chandler, in a coma, from which he never recovered. A H1N1 Flu mist killed Sandy Kanervisto’s 19 yo son. A 12 month vaccine cocktail, followed by a flu shot, killed Krystle Kordingley’s toddler. These are just a small sampling of the vaccine injuries among Utah children. My doctor has noted that the incidence of many chronic illnesses, formerly rare in children, has been spiraling upward. The infant mortality rate in the United States in 2014 was 6.1 per 1000 live births—double the infant mortality rate of the Czech Republic and far higher than most first world countries. (We give Hepatitis B vaccine to our newborns).

LDS missionaries are returning home in record numbers with myriad chronic disorders, some ending their lives with suicide. Several returned missionaries have told me that their health and/or psychological problems followed closely on the heels of vaccines, prior to or during their missions.

Accounts of injury and death are increasing along with the CDC’s recommended vaccine schedule, which has increased from 24 doses in 1983 to 72 doses in 2017. Utah’s Autism Spectrum Disorders are among the highest in the nation. The national rate reported for 2017 is 1/36, compared with one in 10,000 in 1975.

There is ample evidence that vaccines, rather than boosting the immune system, actually dismantle it; that childhood and other illnesses are beneficial to the immune system, and that with proper nutrition and sanitation, they can be navigated successfully, and begin to provide true herd immunity; and that fully unvaccinated children are far less prone to chronic illness than those who have had any vaccines.

Yesterday was Colton’s funeral. His passing is a wake-up call for every leader, ecclesiastical and civic, to proactively open a public dialog about vaccine safety. It is a call to review pressure or mandates to vaccinate for church, hospital, and school employees and for missionaries and college students. We must have accurate information on which to base our health decisions. We must learn why our children are suffering and dying. Educate yourselves on what we now know about vaccines and the immune system. Get involved in this discussion. Be part of the solution.

There is life beyond vaccines.