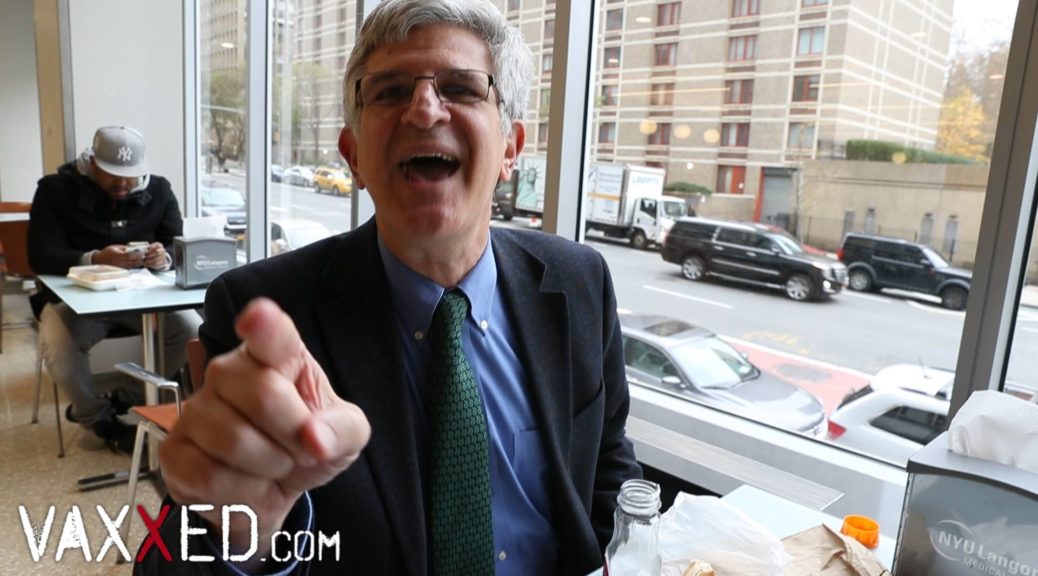 The VaxXed team, miraculously, got a filming permit to park in front of the building for the entire day of the symposium. 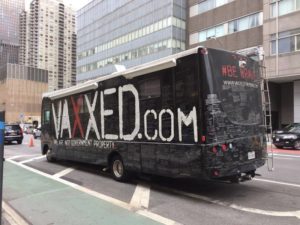 A couple of hours prior to the meeting, VaxXed camera man, Joshua Coleman, father of a vaccine injured child, approached Dr. Paul Offit to request an interview. Mr. Coleman was very polite, yet apparently threw Offit so far off his game that he was unable to control his mouth or his manners–and felt compelled to lie about the situation afterward.

Offit’s description of what happened. 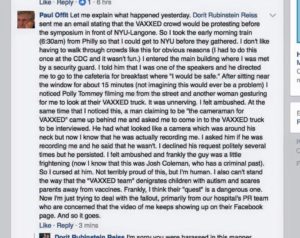 Paul Offit has made more than $17 million from vaccine sales. He is the creator of the first Rotavirus vaccine, which was pulled from the market for safety reasons. He claims that infants should be able to receive 10,000 vaccines at one time, with no adverse reactions. He was at Langone to participate in a symposium on “Confronting Vaccine Resistance,” but could not disguise his contempt for or spare time to discuss his thoughts with actual “vaccine resistors.”

Dr. Paul Offit, one of the most vociferous defenders of vaccine safety, Chief of Infectious Diseases at Children’s Hospital in Philadelphia, and a Professor of Pediatrics, has a long-standing reputation for being ill-tempered, foul mouthed, and untruthful. On November 21st, he demonstrated all three, for the world to see.

Joshua Coleman with son, Otto, who was diagnosed with vaccine induced transverse myelitis at 17 months. 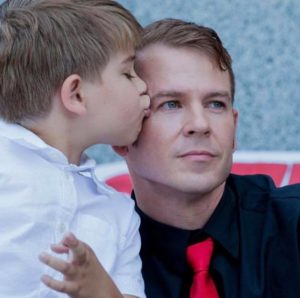 California Senator Richard Pan, was the sponsor of last year’s California’s SB277, which removed all but a tenuous medical exemption from school children in California; is a top recipient of pharmaceutical money in California.

(Note: This article was written prior to passage of SB277. More money was given to Senator Pan after the passage of SB277, and he was the recipient of PAC money that is not included in the totals listed in the article.)

Dorit Reiss, is a Professor of Law at UC Hastings, San Francisco; outspoken proponent of the CDC vaccine schedule.